I have two sisters: one small (little sunshine) and big (the hollow tree).

Just like most siblings, we weren’t always best of friends when we grew up: Hollow tree wanted to push me off a cliff once (at least she drew a picture illustrating her doing just that), and I forced little sunshine to eat a maggot and threatened to beat her “yellow and blue” if she told mum and dad that I nearly set the house on fire (I also forced her to walk three meters behind and on the other side of the street when we went to the kiosk to get our Saturday night candy. And I thought that it was mandatory to make her believe that blood pudding was made out of camel blood, so I claimed that that was the case until she was 11, and oh, and I did forget her outside for several hours when she was 4.. that gave me a curfew), but there are no ones I love more in this world than my sisters.

Their humor is of as low quality as mine and they know me inside out and up side down. Everyone deserves to have a sister. I have two!

With Sunshine living in Gothenburgh, Tree in Stockholm and me in Umeå, we’ve unfortunately been separated for quite some time. Me moving to the Arctic did not shorten that distance geographically.

Fortunately, Hollow Tree don’t give a damn about geographic distance. A few weeks ago, she decided to quit work early and take the long flight via Oslo to visit the north.

We had last seen each other when I and Martin went down to visit her and her family on Gran Canaria, but we both felt that we didn’t get enough time to TALK about EVERYTHING during that visit (very few people talk more than I do. Tree is one of the few privileged ones who do. In contrast to me, however, she never talks about herself, she just talks and asks about everything. Sometimes, I have to inhale exhale in her place so that she doesn’t suffocate), and so in spite of the very sunny weather on GC, we felt that we needed a rain check. We cashed that check during a weekend when Tromsø had the courtesy to show itself from its most non-rainy side.

I don’t know what most people do when they feel a dire need to TALK about EVERYTHING. When I and my sisters get that urge, we either walk or run. Since running is still out of the question for me, and since I wanted to show Tree the EVERYTHING in Troms, and because I haven’t been up the big (not bike approved) mountains here yet, I chose to take my beloved Tree to climb Store Blåman (the big blue man), 1044 m asl.

As we stepped out of Ralf that sunny Saturday morning, neither she nor me had any idea of what we were getting ourselves into. Big blue man is a very rocky old man, marked “black” in the tour book, but that didn’t scare me. I’ve climbed my fair share of mountains and this time, we weren’t even carrying bikes. In addition,  almost everyone in Troms has climbed Store Blåman at least once. Both I and tree have good physique, how hard could it be?

Note to self 1: just because I’ve climbed mountains with a bike more times than I can count does not mean that I’m an experienced mountain hiker, it just means that I’ve gone up a lot of mountains that you can ride down, i.e., fairly mellow hills. Note to self 2: this is Norway. Just because everyone does it does not mean that it is easy. Store Blåman may be a walk in the park for a native, for a Swede with slight vertigo, Blue man is very far from a park.

The trail starts of pretty easy and well marked (perfect for talking about EVERYTHING, including the crazy bananas beauty of Troms). Then it becomes a whole less easy and a whole lot less well marked (more suitable for talking about the fear of falling to your own death). We constantly had to search for the trail, and hold on to the wall as we scrambled up hill. 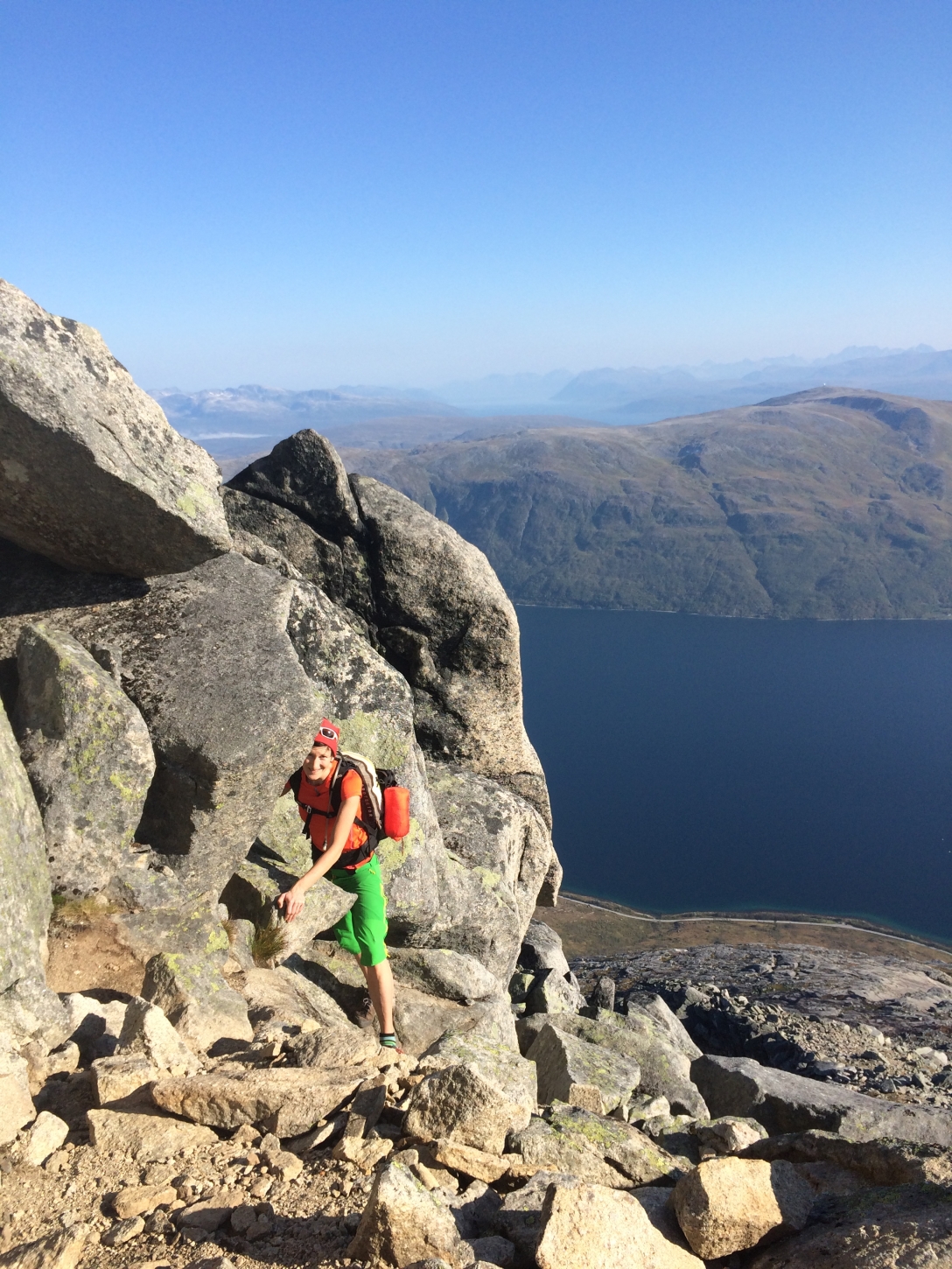 At some point, I actually started using my (albeit limited) climbing skills. Lucky for us, a completely non-native (Italian or perhaps French) girl saw my lacking skills and directed us to a somewhat easier route to the summit. I wouldn’t go as far as saying that that way was a walk in the park, but at least I wasn’t scared of falling to my own death anymore.

Once at the top of the mountain, we were greeted with the view of the world.

We could also see the fog rolling in from the sea. Even if I’m not an experienced mountaineer, I do know that going down a dry rock slab is a whole lot better than going down a wet rock slab, especially when there are cliffs beneath. Consequently, we ate our sandwiches in one bite, got ourselves acquainted with some nice locals and followed their steps down. That showed us that them locals know what they’re doing when they walk up (and down) mountains. We do not.

The thought of going down again had made me terrified going up, but as we followed Thorild and Øystein, I found myself chatting along about everything from sexual risk taking to research on avalanche safety without any thought of falling to my own death.

We got down just in time to see the mountainside fall into shade and the fog rolling in. Needless to say, we felt like champions (two days later, I was so sore that I couldn’t walk. Apparently, I am not used to walking down mountains…).

We celebrated our victory by eating enormous amounts of saithe and drinking bubbly, and by continuing talking about EVERYTHING. At some point, Martin (who is also one of the few privileged ones to match my competence in talking) got so tired that he had to retreat to the sofa. I and Tree didn’t even notice, we were to busy talking about life, the universe and EVERYTHING. I love my sister.

One thought on “Sisters’ love: Part I”