March 26. 2017. The light has returned to the Arctic. Today, we lost 1 hour due to daylight saving. This is my first post in a very long time. It doesn’t contain any deep thoughts, just a recollection of the time that has past. It is more  a private diary than a public blog post.

So far, 2017 has been tiring, strange, terrifying, heart warming and exciting. My body has been weak and tired. The weather has been strange and scary. The politics both on this side and across the Atlantic is mind-boggling and terrifying. Peoples efforts to make an effort, contribute, and do good things for others has been heart warming, and work has been exciting.

Just before the X-mas holiday, I found out that my 4 year research project “The risk we take and the life we make – effects of positional concerns and bounded rationality” received funding from the Norwegian council. I am now officially a grown up researcher, I am the PI (not in the Magnum sense) of my own big international project. I reacted by getting arythmic heart beats, sleeping problems, aphasia, and a collapsed stomach.

Of course I fell ill, and so I spent New Year and the first week of 2017 lying on the sofa with a very annoying and agressive virus infection.

I spent the second week of the year trekking the jungle of Rwanda and Uganda with my 70 year old mother, and my 2 Ent sisters. 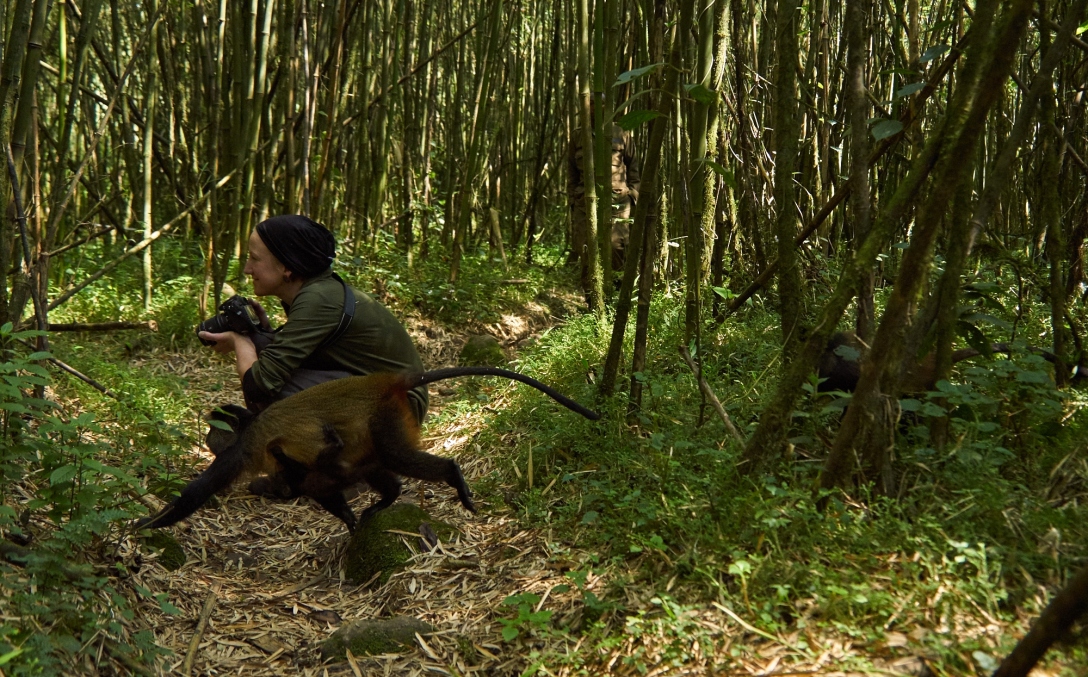 I have spent quite some time working in Tanzania, Malawi and South Africa before, but I have never experienced anything like Rwanda. I know that there are problems underneath the surface, but I felt … hope, and determination to succeed in a way that I haven’t done in the other countries. Plastic bags are banned. Women are represented (however symbolic this representation is) in parliament. HIV incidence has dropped below 0.11% (prevalence is stable at around 3%). Proceeds of the money from Gorilla treks are given back to the community. I felt a very strong urge to return. But the trip was not just exhilarating because of my return to Africa, our “Mummy king” celebration was an experience of a life time in itself. I’ll leave it for now by saying this: Mummy king is a true queen, everyone who comes in my two Ent sisters’ way fall instantly in love with them, and I am truly blessed.

I came home from Uganda with a warm heart, and Campolo bacteria in my stomach. I don’t recommend the latter. After a week of high fever, lime green feaces, and a diet of decoted oatmeal and mineral water, my weight was substantially reduced, and my immune system effectively gone.

My plan for this spring was to get my research project up and running, finish my practice to become an avalanche instructor, take the education to become a full member of the avalanche rescue team at Norsk Folkehjelp, participate more in the language cafés for refugees here in Tromsø, work on my skiing technique in the local ski resort, and reclaim the backcountry together with Martin.

Instead, I have found my self bound to the sofa for most of the past three months. I haven’t skied in Tromsø Alpine center once, and I can count my number of backcountry trips on my two hands.

But I have worked. From the sofa, and my office, for more hours than I can count. I did not move to Tromsø to enhance my career. I moved here to focus on other things than work. Now all I think about is work. Even when I sleep. I know that it is sometime (often) a burden to the people around me, but I can’t help it, I love it! I love discussing with creative and competent people at daytime, and late at night. It makes me grow old and sometimes (often) a bit (a lot) touchy, because I am so tired, but I love it! It is such an enormous privilige to love work. Our first survey (for Norway) was launched this Friday (you will soon be able to read more about it here). Time to test if our baby can walk. I am super nervous and super stoked. My research is not rocket science, and it will not save the world, but I hope that our results in the end will help people stay safe in the mountains.

So the number of tours have not yet been in plenty. But during the few days when my lungs haven’t been preoccupied with turning themselves inside out, I and Martin have actually and finally had the chance to enjoy the backcountry together again. This autumn, it didn’t look like that would happen. Martin’s physio was not at all impressed with the idea of him snowboarding this season. It looked like another spring on the sofa for him. But then he was wise enough to seek a second opinion from our friend, Marius, who instead of being worried thought about what had to be accomplished to get Martin back on the board. The conclusion was systematic and much tougher rehab to build the right muscles. It worked.

He will have to take it real easy until the knee is fully healed. But he is out there again. I just love to see him swing. 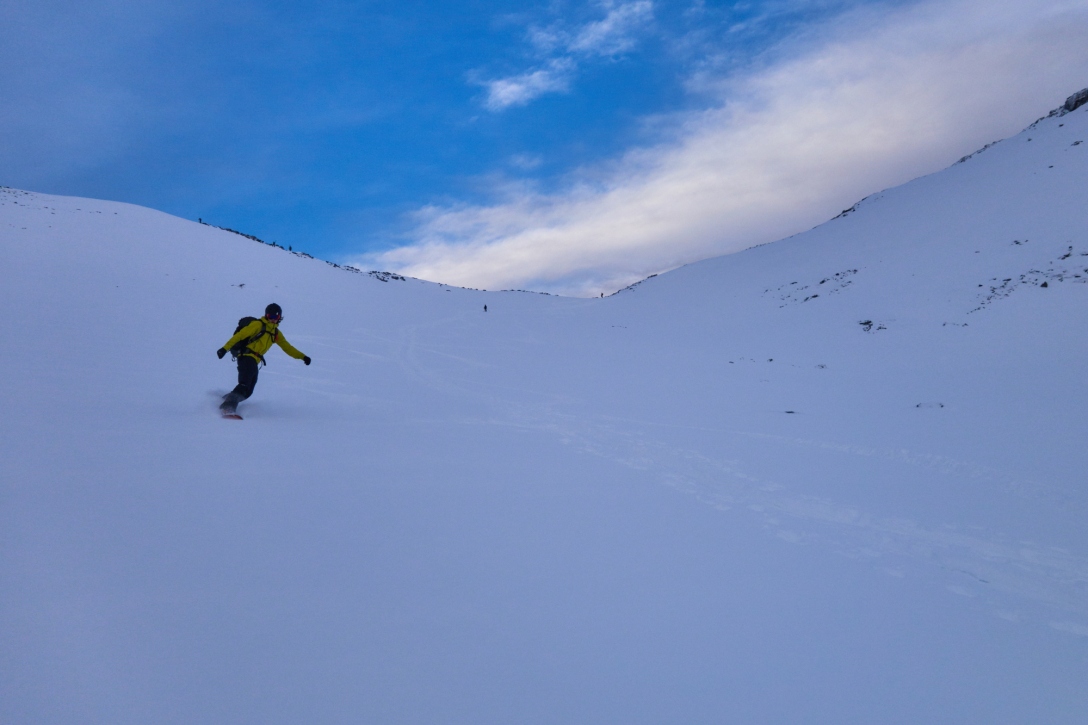 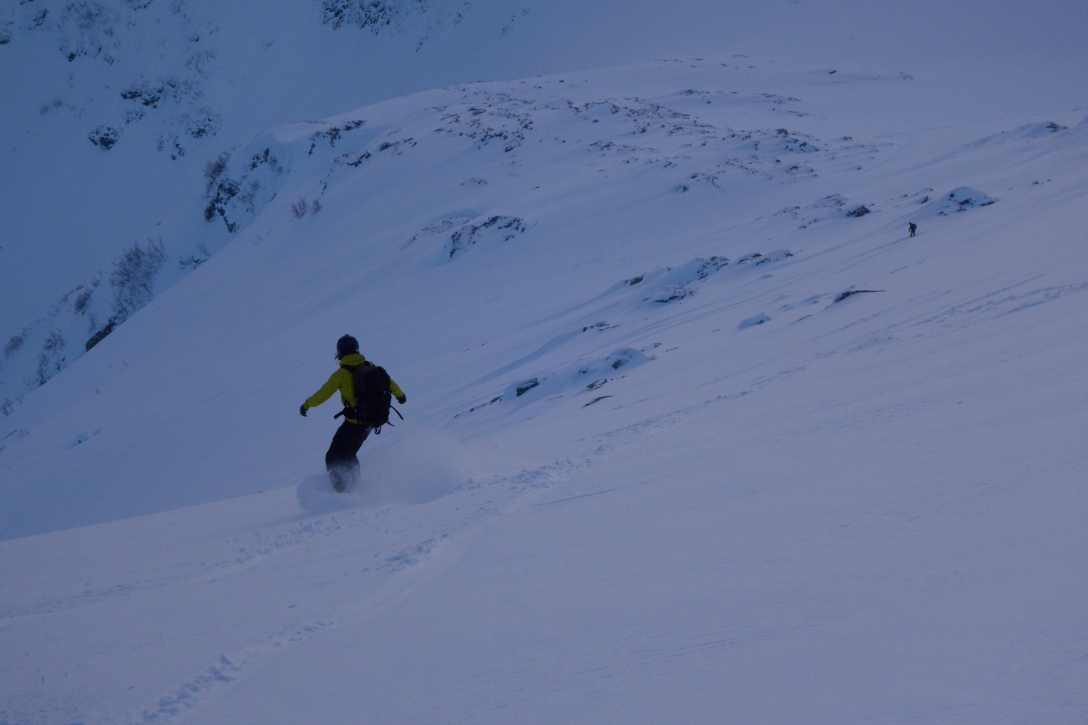 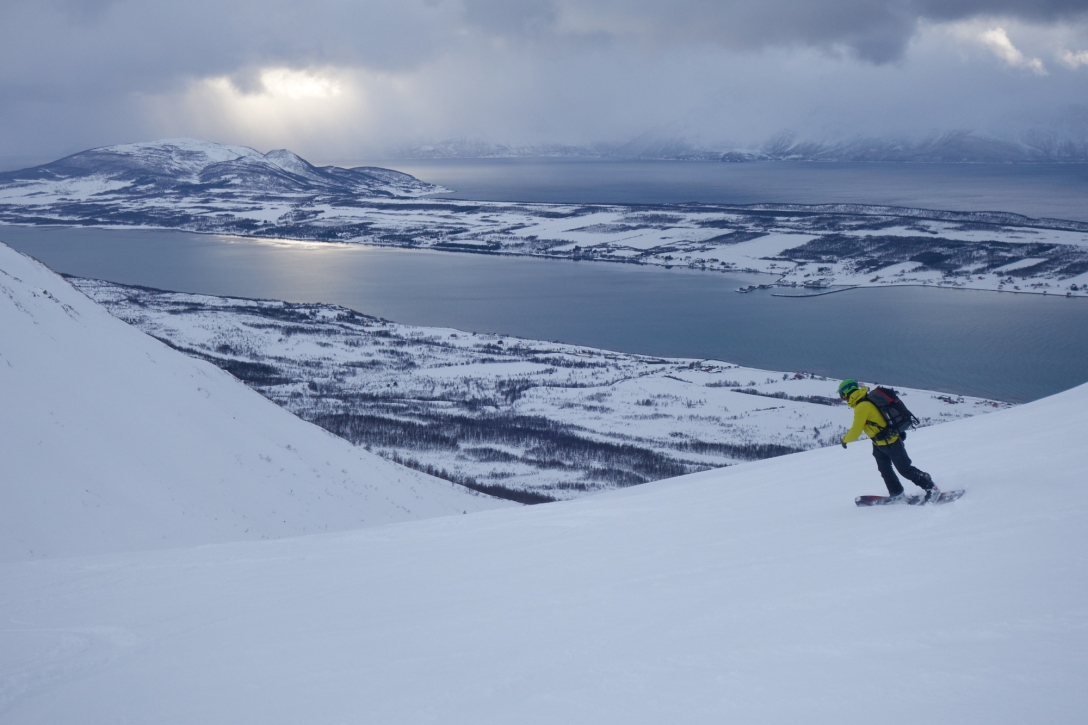 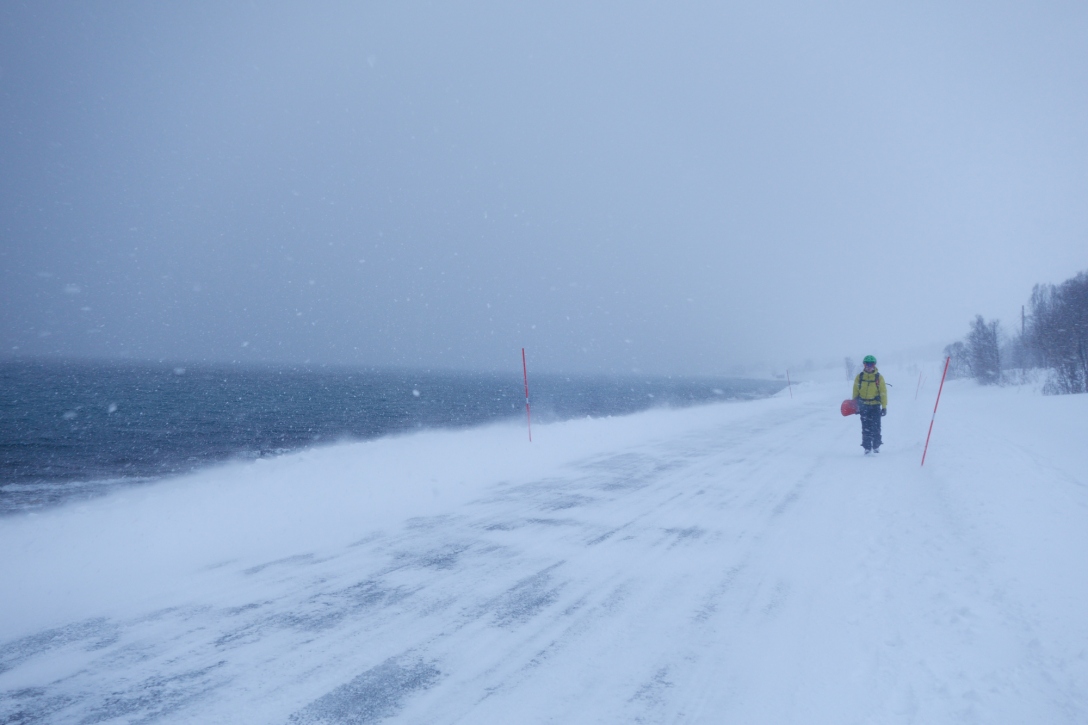 This winter has proved to be a very good winter to be bound to mellow terrain. The strange weather pattern, with periods of high temperatures and rain, followed by cold temperatures and snow, has resulted in nasty persistent weak layers that keep catching people off guard. I hear reports of near miss accidents almost every week, and on the 16th of March, one person died in an avalanche in Lyngen. During this time last year, most of our friends were off skiing different chutes. This year, we have all been forced to stay away from serious avalanche terrain. So instead of experiencing the exhilarating flutter of charging, we have all enjoyed the still joy of cruising. The tours have neither been many nor radical, but with soft snow, spectacular views, and the wonderful company of all those friends, the season so far has been more than decent. 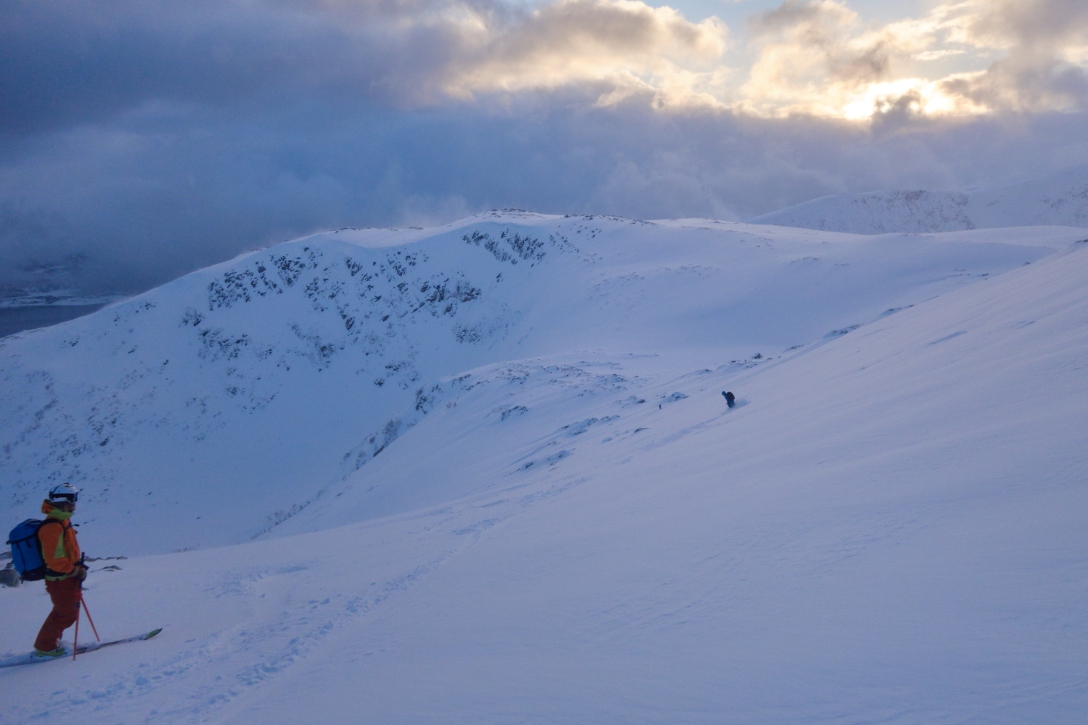 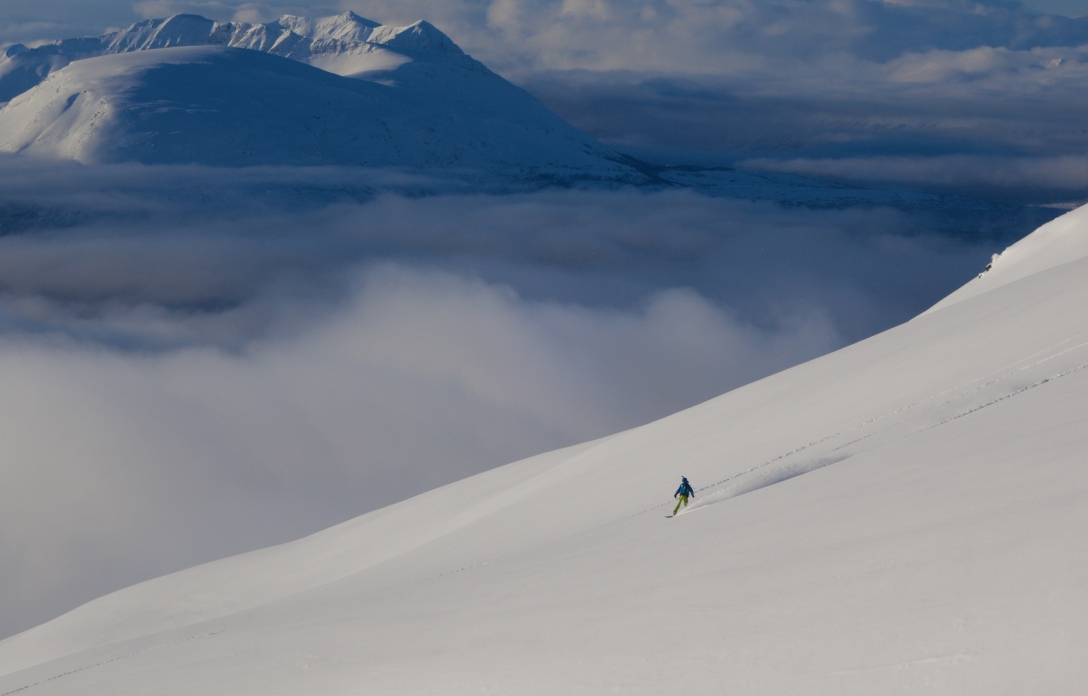 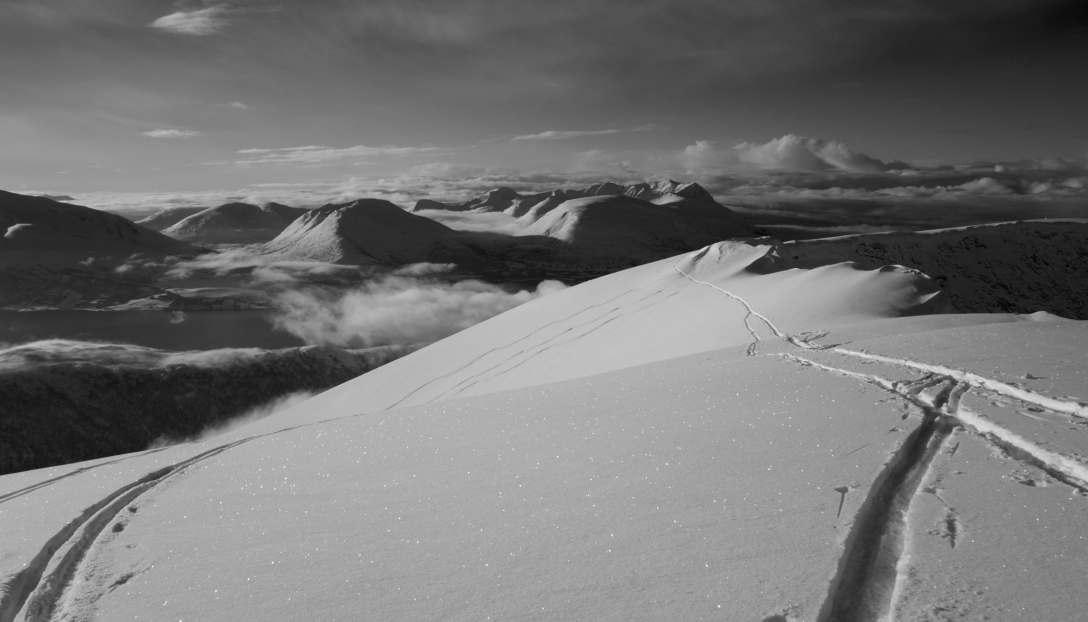 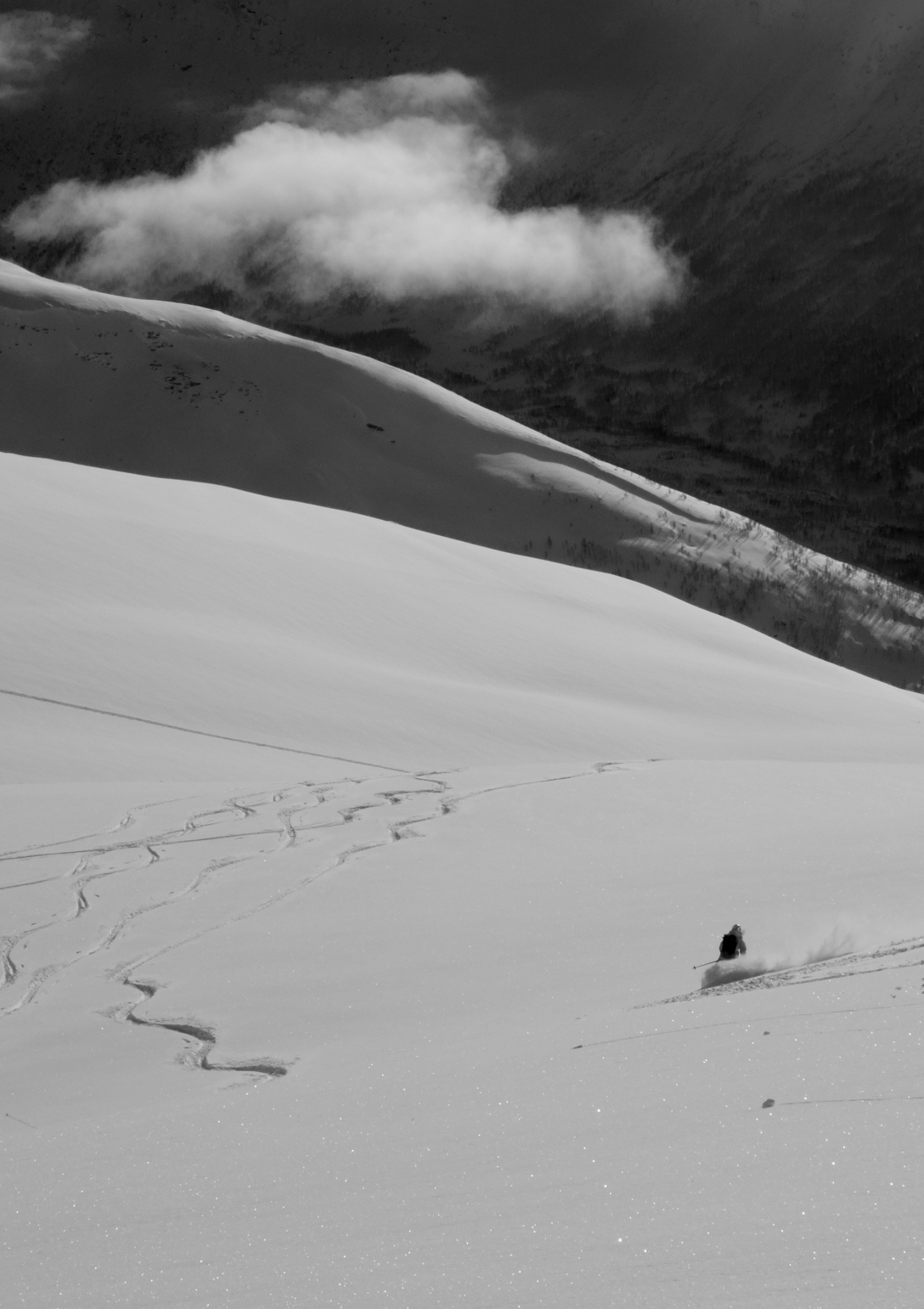 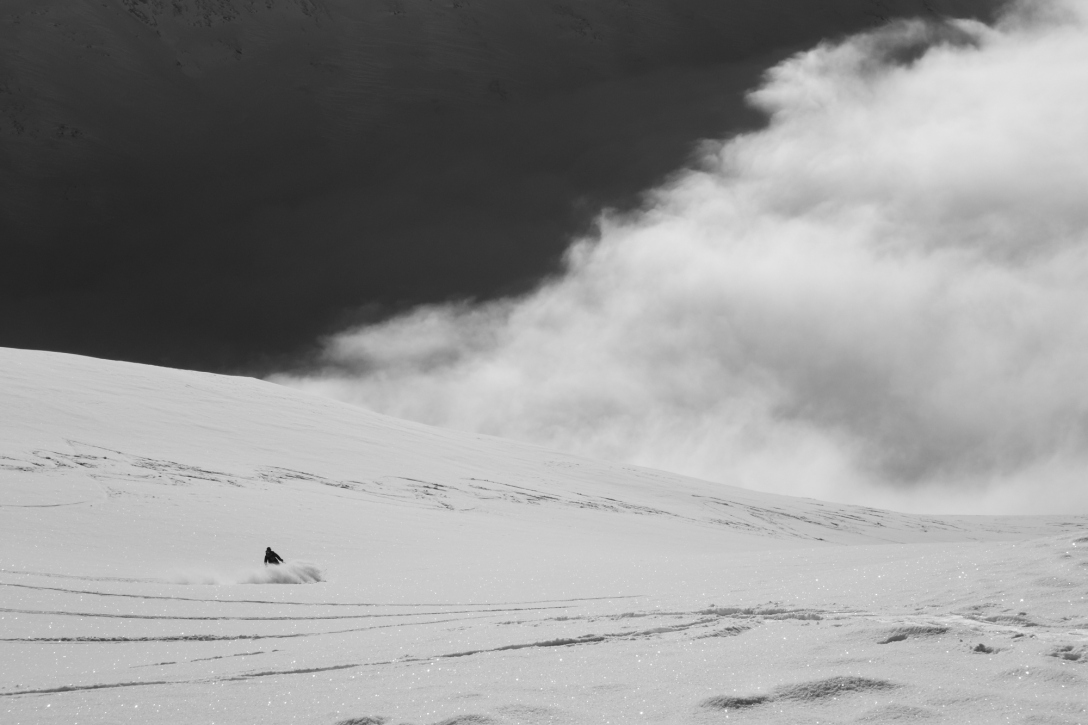 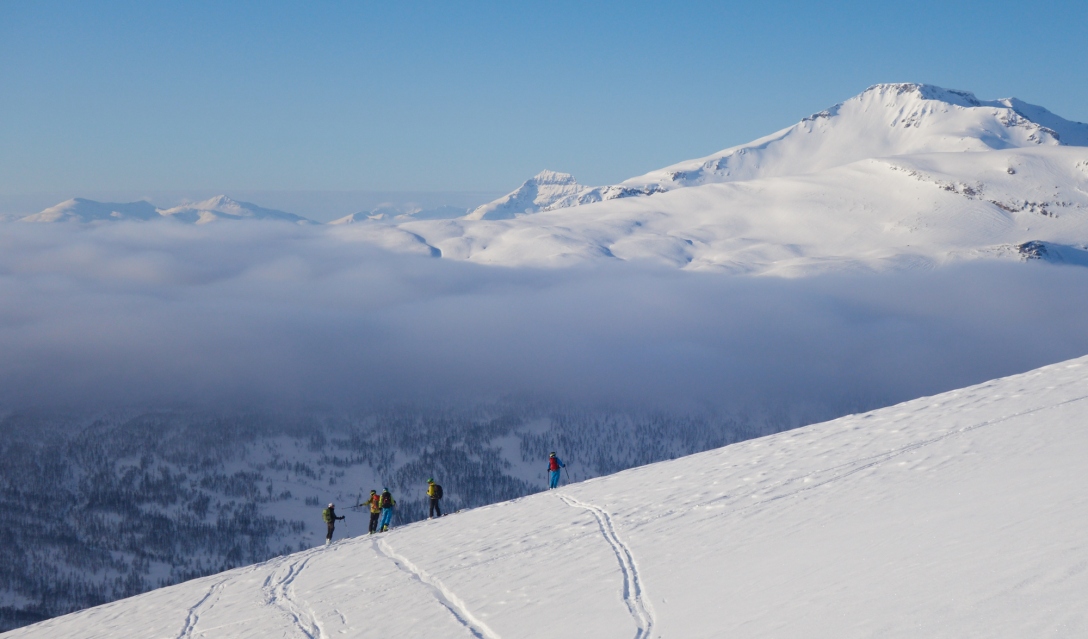 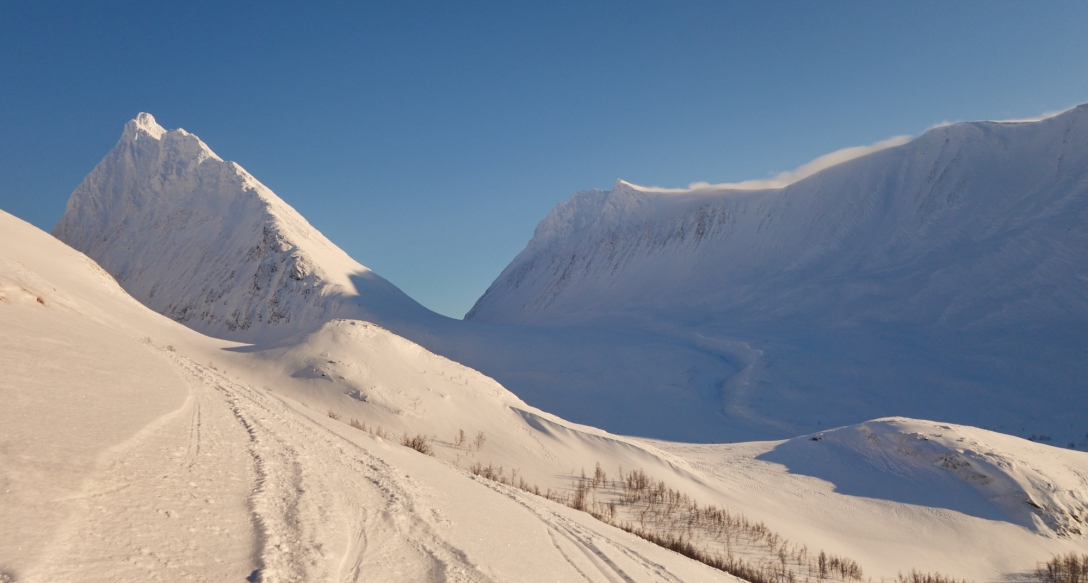 Oh, and then I turned 40… I have to admit that I have probably had some form of middle-age crisis (again). I am still planning for the time when I will finally learn how to ride down mountains properly, with or without snow on them. To learn how to be tough. To get strong. 40? I have no dog, no house, no kids, and the car that I do have is a seriously malfunctioning Sharan called Roland.

To celebrate my high age, I invited a couple of friends to come stay with me in a house in Lyngen. In reward, I got a memory for a life time. Emmy created a treasure hunt, including using GPS coordinates, rescue dogs, and transciever. Martin turned us all into kings for a day. I got both equipment and a crash course in wilderness first aid. Troms treated us with all kinds of weather. Magic mountain lodge treated us with a sauna, beer, and delicious food. My friends treated me with never ending laughs and their general awesomeness. 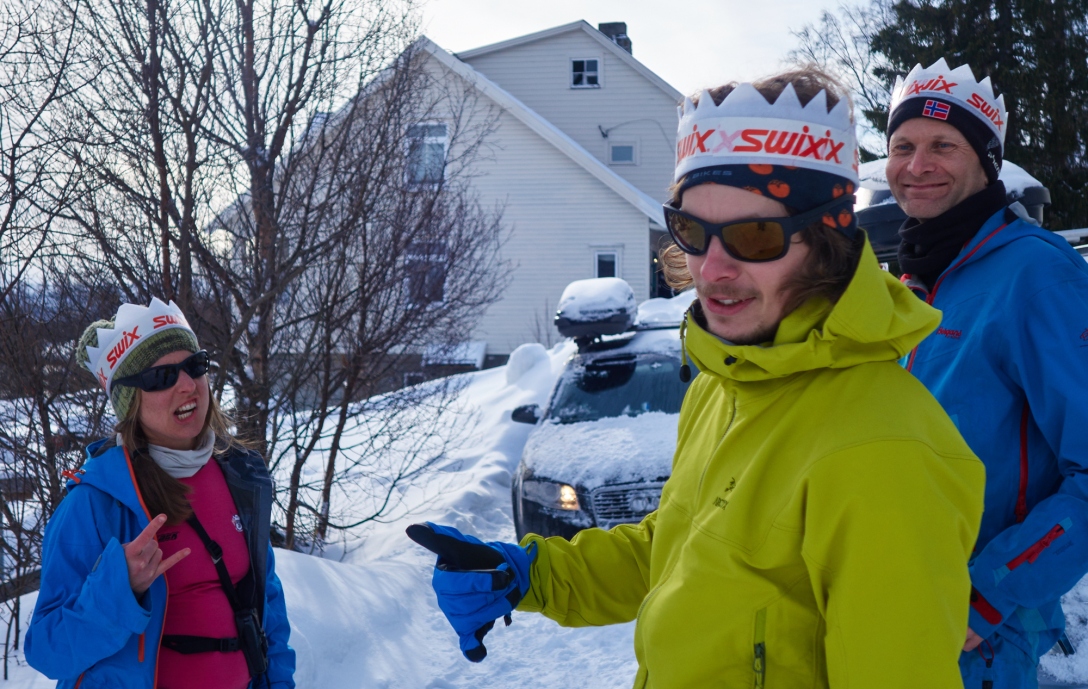 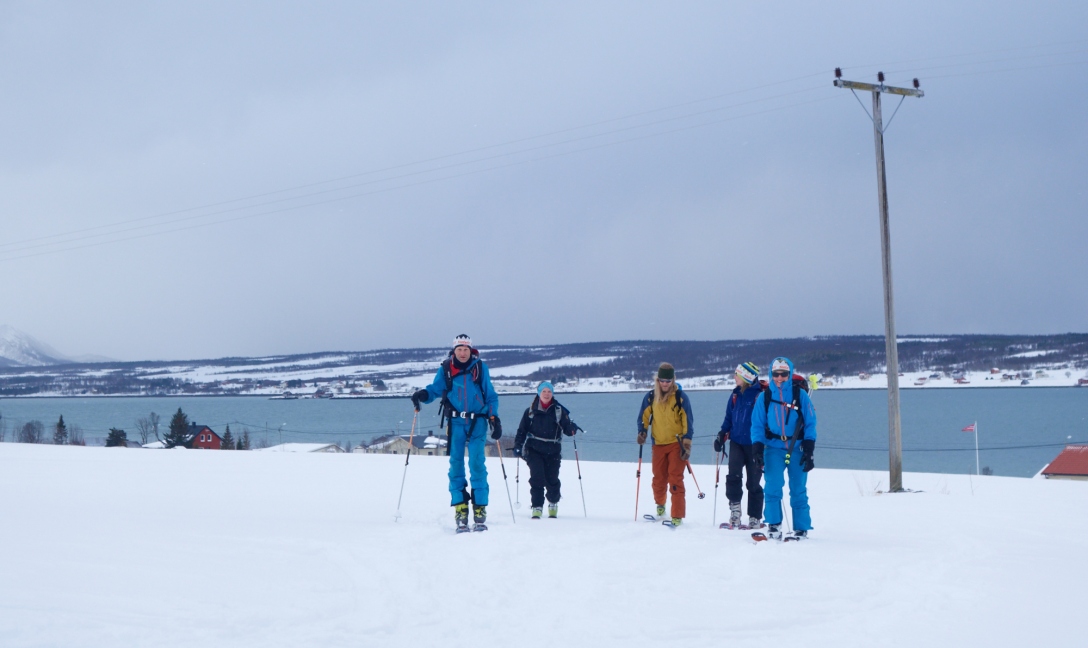 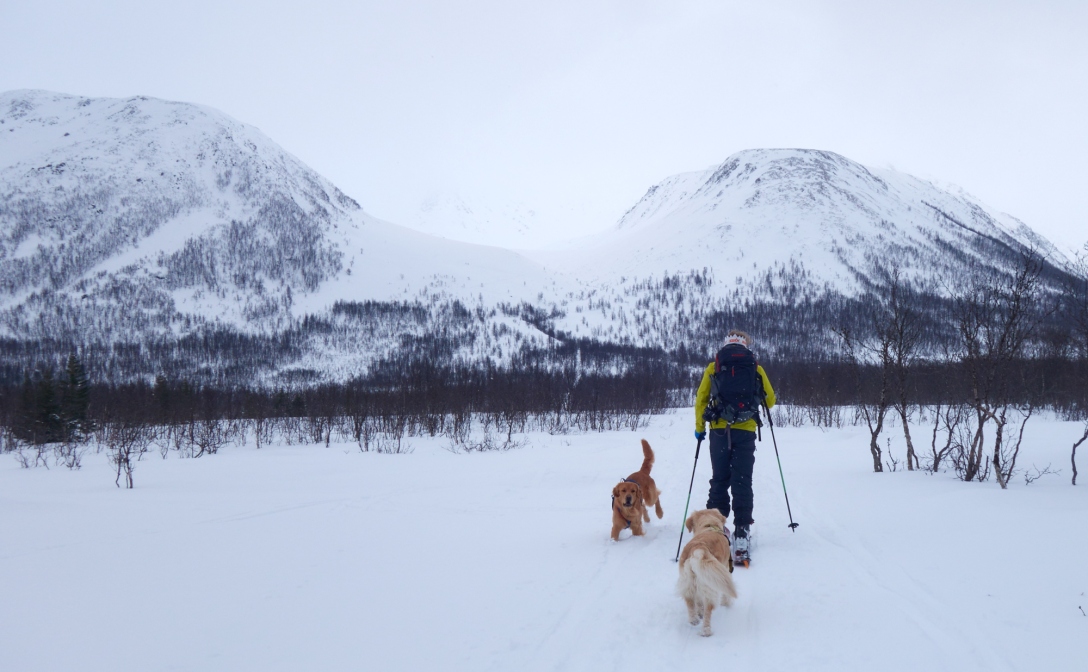 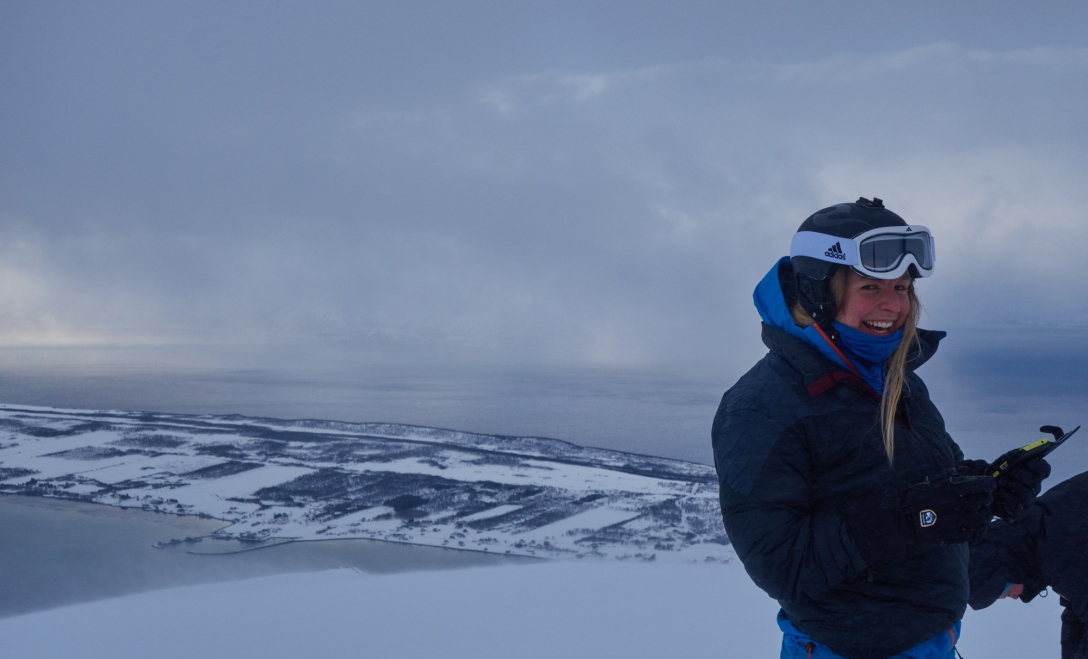 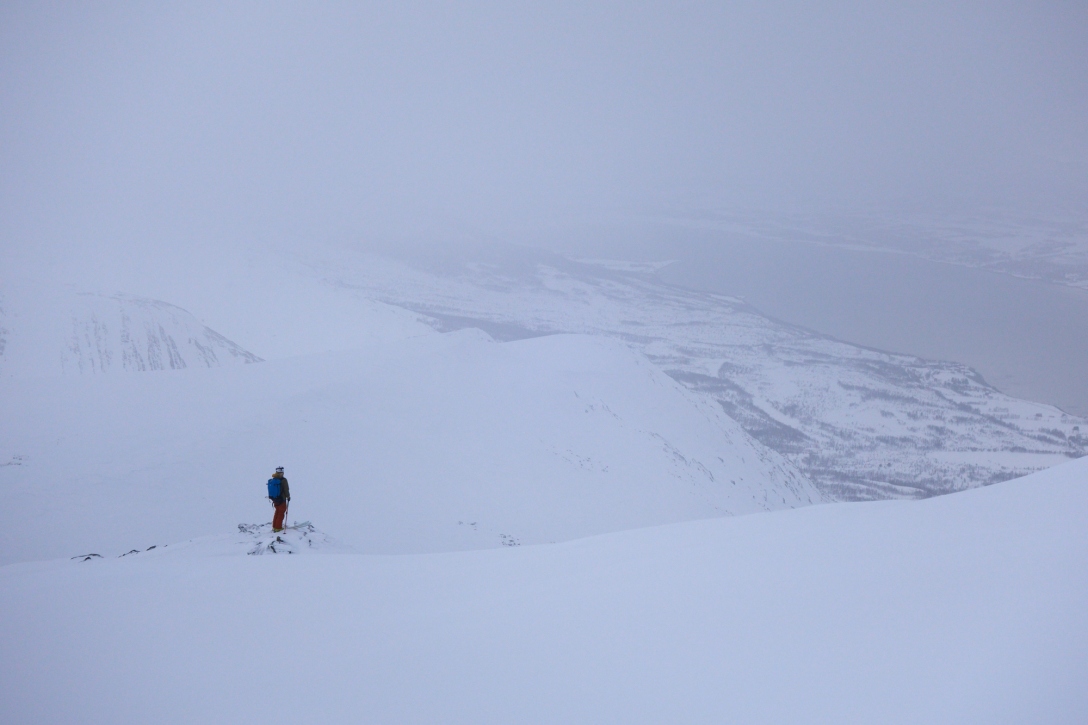 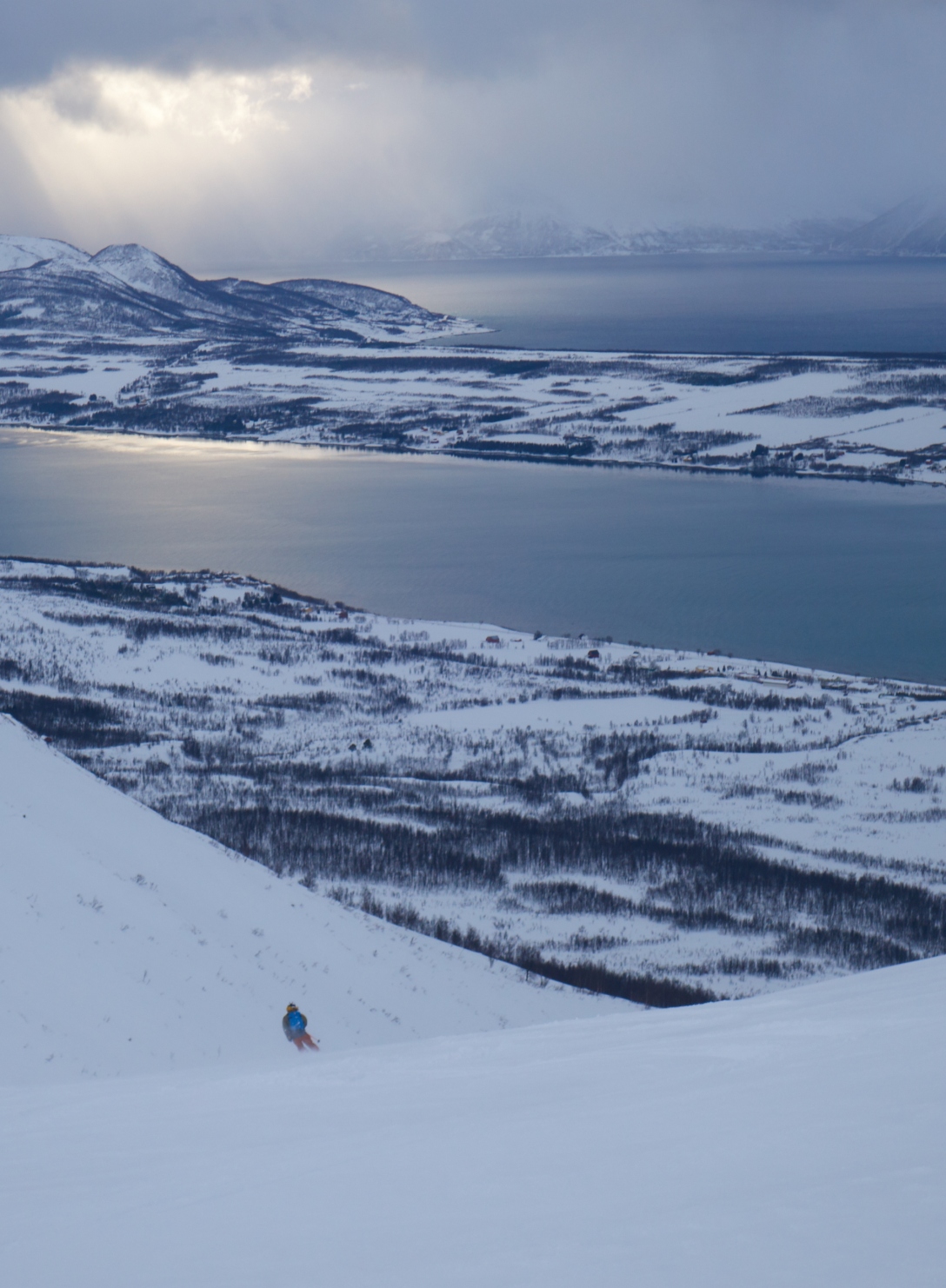 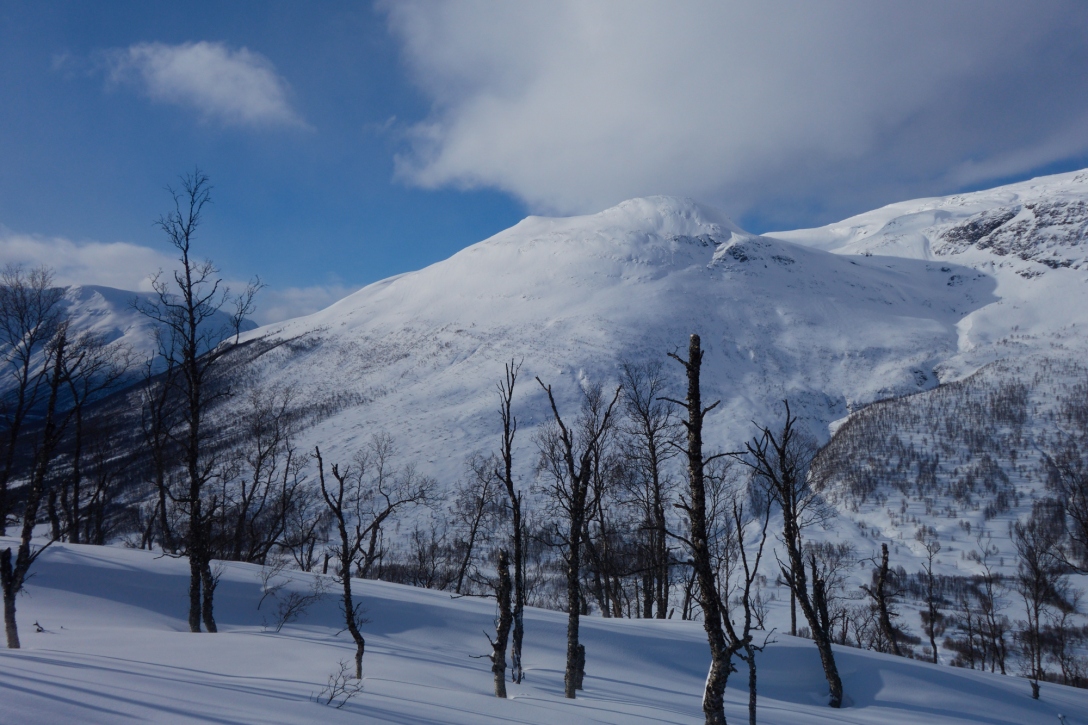 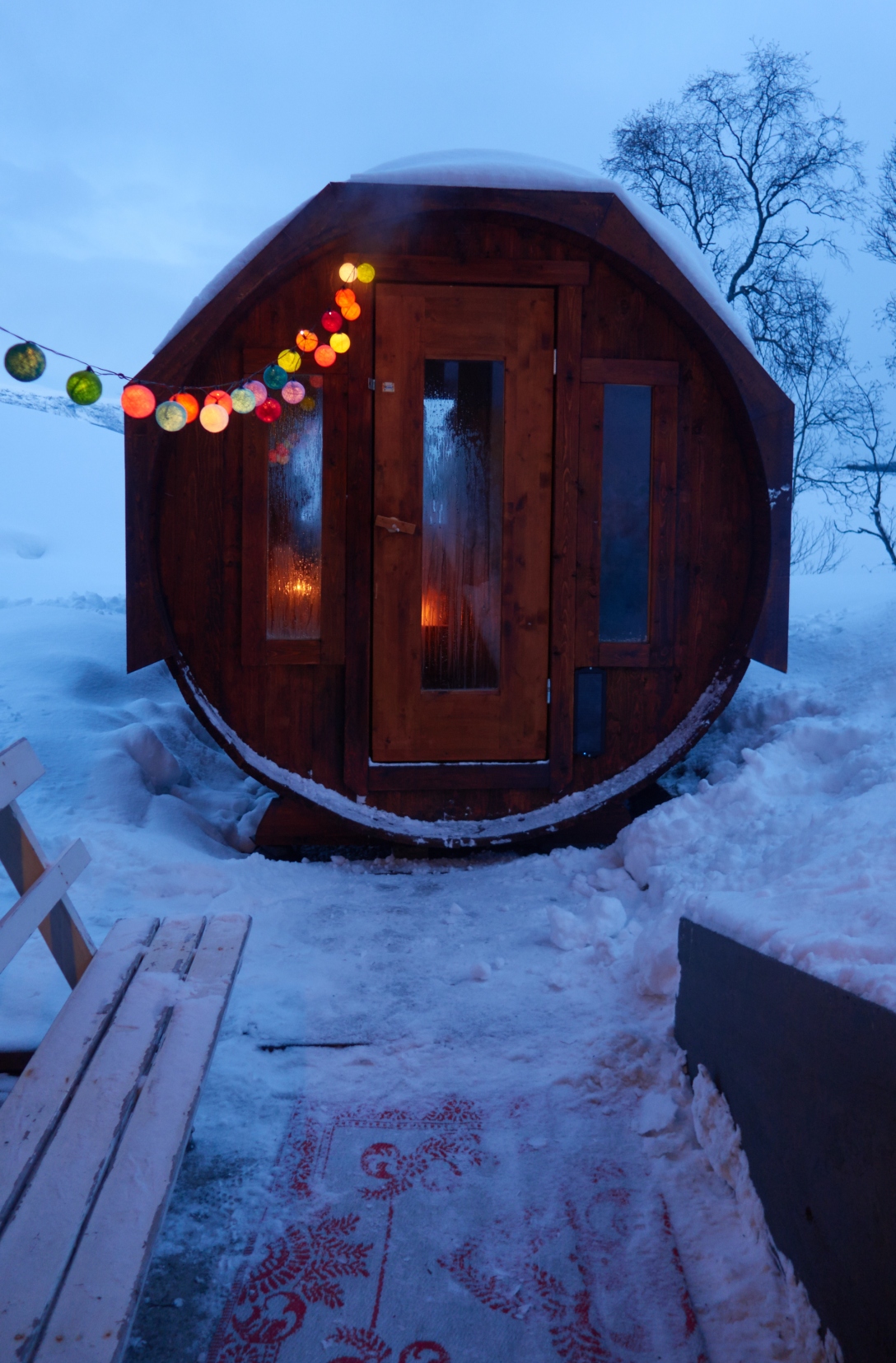 It is March 26th. Another polar low has hit Troms. The politics on this, and the other side of the pond makes me want to cry, but last week my mother told me that not a single one of the refugees in Umeå would have to move because people opened up their homes to them. I have blue rings under my eyes, and my hair is growing thin, but I have just launched my first large research project. Martin has a weak knee, I have my damned leg, but we can ski together again. I am 40 years old, and I spent my week learning wilderness first aid and skiing in Tamok with two super women. Life is a roller coaster. Come fly with me.