And so it was finally time to let Steve, Maria’s pimped Caddy, show his true color on his premier tour in Norway. Our plan was to spend almost two weeks on the road, working our way towards the mountain bike festival, Hokkfest in Ål. And yes, we were pretty stoked about it.

Our friend Cecilia Thomasson had previously been biking in Oppdal, Norway, and so, we thought that it would be a good idea to follow in her footsteps and start there.

Driving to Norway through the inland of Sweden almost always involves driving through villages with brilliant names, and driving in Norway always involves sheep, mad athletes and very narrow roads with a whole lot of turns. Quite the opposite of Wyoming. I nearly shit myself a number of times. 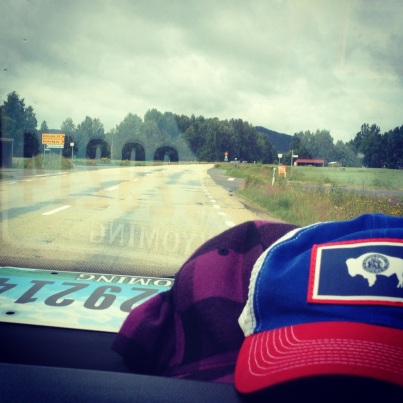 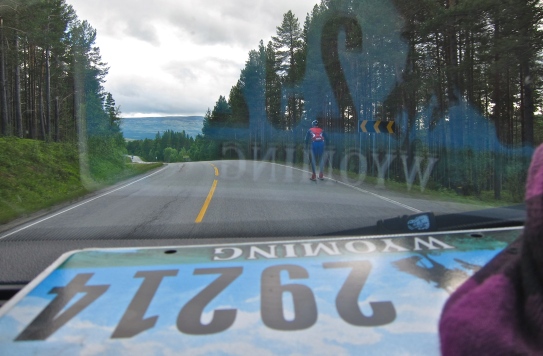 Of course, the first thing that met us in Norway was some crazy dude skiing in the middle of nowhere

The switch backs at Trollstigen. Oh yes, they go way up those clouds, and no, there is not more than one lane.

Since we are what we are, we had of course not planned a whole lot ahead. Like bringing a map over Norway… Oh well, we had been there before and I THOUGHT I knew where Oppdal was. Wrong. Of course I was wrong. But what is a 100 km detour when you’re in Norway? A whole lot of more hours in the car, since you’re only allowed to drive 80 km/h even on the highway (which is most often narrower than an old gravel road in the US) and absolutely stunning views.

Anywhoo, after about 13 hours in Steve, we reached Oppdal and started our quest to find a camping spot. We had brought a water container, but of course forgotten to fill it up, so we set out to find a regular camping. In the alpine terrain quite a distance outside town, we found one but it had closed for the season. It was completely deserted. Just old RV:s standing around waiting for the next season.

Since we needed water, Maria went to check if the restrooms where open. They were. Inside, the heat was on and through some speaker, techno music was playing… While Maria was desperately filling up the container (it took some time since she had to use a small bottle to fill it – a perfect scenario for “blond girl walks into a room where the light doesn’t work and gets axed murdered by Jason in Friday 13:th”), I of course stayed in the car wondering if I should lock the doors. I’m such a true friend. But neither of us died, and we did get our water, and then we found the perfect camping spot with sheep and everything and stayed our very first night in Steve. It was of course wonderful. 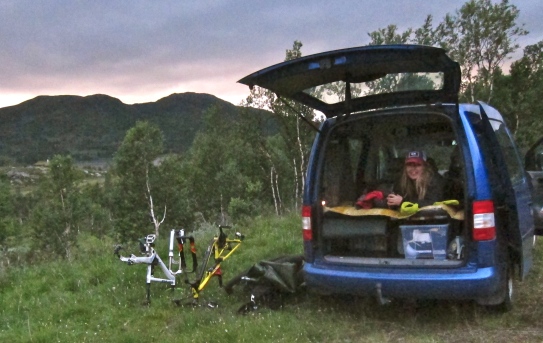 The next day, we got ourselves a map and headed out for our first ride: Allmannberget (1342 masl). The trail starts in the outskirts of town and is a combination of singletrack and a more or less rocky road. It is not very technical but relatively steep, so going down is faast and fun, and the view from the top is absolutely stunning.

Maria pushing up that hill 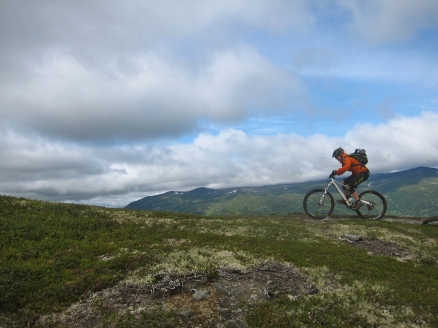 However, although Oppdal is extremely beautiful in comparison to most other places, we knew that Norway is Norway, and in comparison to some places further south, Oppdal seemed, well, a bit boring. We wanted FJORDS and crazy steep fang-shaped mountains darting down into them, so as soon as we came down from our ride, we took Steve back over Dovre fjäll and headed for Valldall and Fjörå.

We had been to Valldal and Fjörå before. Last year, the two of us made our first bike trip to Norway. That trip was just as unplanned as this one, and contain a whole lot more of misfortunes and lucky coincidences. That trip started in Trondheim, where Maria broke her derrailleur hanger on the wonderful trails of Våttakammen.

Me in the back seat, as always

Of course we had brought extra, but since these extras had been ordered from the shop where the bike was bought, we hadn’t really checked that they were the right ones. Of course they were not (neither Maria’s nor mine, although mine didn’t break), so we had to go for a quest to get a new one. After some investigation, we found out that the importer of Commencal was located in Åndalsnes and he potentially had the right hanger laying around. Since Åndalsnes was on the way to Fjörå, which we in any case intended to visit (like everyone else, we had seen the commercial by Norröna and wanted to be as cool as the dudes in that video), we didn’t wait to find out if that was actually the case but instead started driving south.

Of course it wasn’t. There was no derrailleur hanger in Åndalsnes. And there we were, in the middle of nowhere (well, everywhere in Norway is in the middle of nowhere, but anyway) on our bike trip with one functioning and one not so functioning bike. So what to do? While Maria contacted a dealer in Sweden, to send the hanger to Åre, we got Martin on the task to find someshere in Fjörå where we could rent bikes. We actually thought it was possible to rent bikes in Fjörå… HA! HA HA HA HA!! Fjörå has about 50 houses and probably some inhabitants, but I’m not completely sure of that because I never saw them. In any case, Martin got hold of the guy arranging the Fjörå bike camp and he told us that there was an ongoing bike camp in the nearby village Valldal. Perhaps we could find someone there who had an extra hanger laying around. We didn’t, but we found a whole lot of great people and some fantastic riding nevertheless. And since going up implied pushing, and going down could be done with just one gear, even Maria could get the ride of her life.

The way up to Liahornet

However, that year, we never got to ride in Fjörå. The other camp members had ridden it the day before, and the day after the camp ended, the clouds were so low we didn’t even see 20 meters ahead of us. So of course we had to go back. Valldal/Fjörå is the Telluride of Scandinavia. This time, we did better. So the next time I get the thumb out of its hiding in my butt, I will describe the epic ride down Mefjället in Fjörå. Since its not always a trivial task to find the trails in Norway, I will also try to include some maps and directions for both Mefjället and Liahornet. Until then!